We started the day with a big buffet breakfast at the hotel. Bacon, ham, scrambled eggs, toast and baked beans along with orange juice and coffee were all on the menu.  Set us up nicely for the day.
We walked to the tram station and headed down to the Centraal Station. Our tram station is Baden Powell Weg.
We saw lots of interesting buildings along the way. Once downtown we walked to the maritime museum which is shaped like a boat. Took the elevator to the roof to get a view of the city. The observation point showed what you were looking at as you looked in each direction. We walked down the long outside stairs and started to roam the city. We walked past nineteenth century sailing ships and seventeenth century warehouses and found the statue of the Barbarian. Just down the street was a small bridge and lift gate. Further along were wooden gates in the canal that could be closed if the water level was too high.
This area had the most beautiful old houses with lovely iron work gates and fences. There were bicycles and flowers everywhere. We walked over several bridges over canals and found a great canal side market. The stalls are like small garages. When the seller goes home he pulls everything into the garage and shuts the door. The doors are decorated according to what he sells.
Next we headed to the flower market. Tulips, hydrangea, and tons of flowers I don't know the names of. Poor Greg could feel his sinuses filling up. He liked the wooden flowers best.
We walked over to Westkirk and the Anne Frank house. No more 2 hour lineups. All bookings are online so you get a time. The church is under renovation and we didn't think we didn't get a reservation on that short notice.
We walked past a clock tower nicknamed happy jack because it's clock never told the right time.
Next on the list were the Cheese and Cow Museums and the Magic Mushroom which sells cannabis and other stuff. We had fun looking but we can't bring any of the good stuff back.
We stopped for coffee and then for macaroons later. Greg thought he didn't like them until he had some made by a proper European baker.
A canal boat tour took up an hour of our afternoon. It was a great ride and the tour guide was good. It took us out into the harbour as well. After the tour we walked to Centraal Station, took a few pictures of St Nicholas Cathedral along the way. At Central Station we found out the harbour boat was free so we went to the other side. There is a building there with a swing on top that swings out past the building. We wanted to go up but decided against when we discovered the entrance fee to the roof was three times the amount for the swing. We came back and took the Metro several stops to see where it went. Turns out it crosses our tram and will take time off our journey downtown. All this is covered in the 3 day transit ticket we bought.
We went to Magna Plaza. This building appears to be about 100 years old. It has been redesigned inside to house multiple stores but the interior has not been gutted. It has instead been kept but using glass dividers the new and old co-exist.
Last adventure of the day was to visit the condomerie and the red light district. They really do have red lights over the windows with scantily clad girls vying for attention inside. After that it was home and relax.
Total steps 28,500 and that makes 22 kilometres. I could do a marathon but it would take me all day. 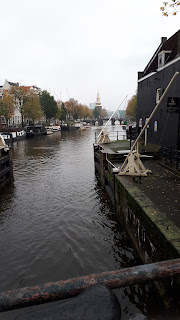 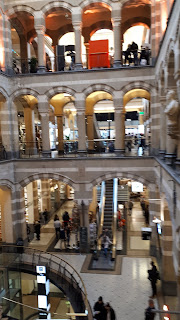 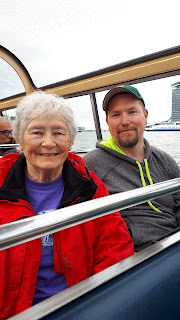 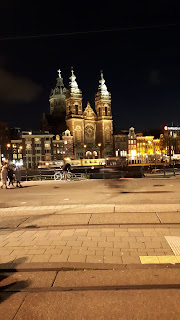 Travelling to and arriving in Europe

Travelling began with being driven to Toronto airport. I thought we had lots of time until we got to Milton and the highway was a dead stop. A bit of a delay but we had allowed lots of time, so we were ok.
We went into security and we were pulled over and Greg got checked. It put us in a shorter line so I was happy. Greg forgot the water in his water bottle so he had to go back and dump it. We found the lounge.  This is the way to go, especially when it is free. A hot meal, beer or wine, snacks and comfy chairs in a quiet atmosphere.
Went downstairs for boarding and found we got on first. It was a good flight to Iceland and they used two doors for exits so we got off first as well. A slight mixup sent us to the wrong gate but the proper one was only 2 gates away.
We arrived in Amsterdam on time. Construction in the airport was confusing but everyone was very helpful, even the bus driver who called out our hotel for us. After exploring the area and finding pizza and dessert we returned to the hotel and fell asleep. It is tiring translating the toppings on a pizza. We will head into central Amsterdam tomorrow morning. We are staying in the sticks.

Posted by LyndaC at 6:46 PM No comments:

My blog isn't very exciting as most of the time I am relaxing, swimming, eating, napping, REPEAT.
Yesterday we swam in the morning. Then Jeff came and took us to lunch and dropped us off at Central Festival which is an outdoor two storey mall built around Central department store and a cinema. We walked through the mall checking out all the stalls and then did a circuit of the surrounding streets. I found a few small items, bargained down some prices and bought myself a sarong. I have been wearing it over my bathing suit. It has large red hibiscus flowers on it. I love it. We took a taxi home and made supper from groceries we bought at Tops market at Central Festival. It has rained here but it usually last less than half an hour and is a warm rain.
Posted by LyndaC at 9:09 AM No comments:

The trip was long, but I slept on the longest leg so it was good. I got fed every time I turned around. Three meals on the first flight and one each on the next two. I posted pictures of the Taipei Airport and the Bangkok airport on Facebook. The trip takes about 20 hours but you cross the international date line so it appears to take an extra day. Fran and Jeff met me at the airport. Thailand is a drive on the other side of the road place.
Jeff took us to a Thai restaurant for supper and we stopped and visited a market square and the French bakery. They were out of croissants so Jeff ordered some for the next day. Jeff's friend is letting us stay at her villa for a few days as no friends are visiting.
Yesterday I slept until 10:00 and we lounged at the pool all day. It is a small pool but I'm not an Olympic swimmer so I just float around in it.
Jeff took us out to dinner for steak last night. A huge tbone and it cost about $8.00 each.

Today we are going to a three storey shopping mall called Central Festival Samui. I will post pictures on Facebook.
Posted by LyndaC at 10:42 PM No comments:

Well, on the spur of the moment with 4 weeks notice I decided to follow a friend and visit her and her son in Thailand.
I'm now sitting in Pearson Airport waiting for a flight to Bangkok with a connection in Taipei, Taiwan. The weather this week in Koh Samui - the island I am going to has been 88 degrees all week. No rain so far and the place seems wonderful.

In the airport I showed my Dublin pictures to a man from Colombia and he showed me pictures of Cartagena. He was heading for Dublin and had never been to Europe.

Ready to go to China

It is Sunday afternoon and I think that 99% of everything is packed. I can't pack the electronics until this evening. 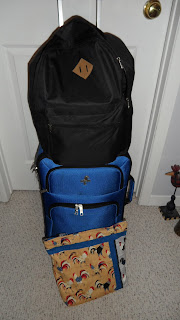 At a few minutes to 10:00 a.m. tomorrow morning I will be heading for the meeting place for the bus to pick up all the people going on the tour to China. We are flying from Toronto to Beijing - a thirteen hour flight. We will visit Beijing, Xi'an, Suzchou and Shanghai.
I have decided to take a smallish (large carry-on size) suitcase, a backpack and my purse. We can get laundry done in the hotels. I just don't want to have to drag around a big suitcase.
So here I go - Fresh haircut, clothes, camera, snacks, purse, tickets, Chinese currency, US Dollars, Passport and Chinese Visa. I'm ready to go!

This morning Leonie and I set off to explore Rotterdam. Most of Rotterdam especially the harbour area was destroyed in WWII.  Therefore unlike other cities in Europe Rotterdam is a new city with innovative and sometimes weird buildings. There is a lot of new sculpture some of which makes you ask " Is this art or can I cart it away?" I took lots of pictures until my camera died and then Leonie took some. There are still some on their way.
The highlights of the day were the new Market building, the poffertjes and the marine museum display of boats in the water. We walked along the Maas, we watched the water taxis going at break-neck speed. I investigated the cube houses. They were very strange and topsy turvy. All the rooms are weird shapes and windows can look down on the street or up but rarely straight across to your neighbour. I think that some of the corners woul be hard to clean and the stairs are quite steep, but it is an innovative idea.
Posted by LyndaC at 2:05 PM 1 comment:

LyndaC
Ingersoll, Ontario, Canada
I did it! I graduated from Laurentian University at age 65.